Bono and The Edge: A Clockwork Orange Score

The members of U2 have worked on many solo projects, with Bono and The Edge particularly active in projects outside the band. Back in 1989 they worked on one project together, one that there is little information about, the stage production, “A Clockwork Orange 2004.” The production was put together by the Royal Shakespeare Company and debuted on stage in London in 1990. The Edge and Bono participated in the pre-recorded score that could be heard during the play. They were even joined by Adam Clayton in developing one of the tracks.

Bono and The Edge were approached by the Royal Shakespeare company in Spring 1989. They agreed to do the play. It meant that Bono and the Edge spent 5-6 days in Dublin doing demos of tracks for the production while the band was also rehearsing for the LoveTown Tour in September 1989. It was a very busy time for the band and resulted in being less rehearsed than they would like for the impending tour, and also left the tracks in an unfinished state for the play. The rough music was left in the hands of producer Paul Barrett while the band headed to Australia.

The LoveTown Tour did not proceed smoothly. Bono struggled with problems with his voice that caused the rescheduling of a number of shows in Australia. The problems continued into the European leg of the tour and saw the band cancelling a series of shows in The Netherlands. Those shows were rescheduled for January 1990, extending the LoveTown tour, but this cut into the time that had been put aside to finish up the music. The Edge told Propaganda: “The re-scheduling of the Amsterdam shows was almost the nail in the coffin. But during that time in London we went to the rehearsals of the production in Clapham, and found it very inspiring — there was no set and no costumes — just the actors, which was powerful and gave us the momentum we needed to go back into the studio and finish the music.”

IMAGE: A Clockwork Orange 2004 Second Programme from the Royalty Theatre

Those first rehearsals of the play that Bono and The Edge saw in London proved to be what was needed to finish the music, as was discussed in The Los Angeles Times: “The members of U2 have never sought to hide their Christian beliefs, and the lyrics of their songs are themselves shot through with a sense of moral inquiry. ‘After seeing the first rehearsal,’ says Edge, ‘we felt that ‘A Clockwork Orange’ had never been so relevant, and that it was worth using our music to try and put the story into this context.’ But the music that he and Bono submitted hardly approximates chart-bound material—nor does it remotely recall anything one might expect to find in a conventional stage musical. The instrument music is rhythmic and abstract, with Edge playing expressive guitar to produce an unsettling effect. Combined with the lightning of the production—which sometimes bathes the stage in blood-red shadows—the music and spoken dialogue evoke an aggressive, violent environment.”

The music used in the play was mostly instrumental. The Edge told Propaganda: “Originally, Bono had this phrase—‘spoken-opera’—for what we were trying to do, which was not really rap but more about rhythms with spoken dialogue over it. In fact, it turned out that the play made more demands on us as composers, and we found ourselves moving away from that and writing music for the narrative rather than writing just to the theme.” The instrumental part shared above came in and out of the soundtrack at various points in the play. The play itself was spoken, and not a musical production, and the music mostly was used between scenes or to highlight actions on stage.

“We worked in some liturgical pieces and blurred the original hip-hop flavours so that it gelled much more with the production. But we have managed to include some samples of Beethoven’s 5th Symphony, as well as some pretty heavy rhythms — there are some very abrasive tracks in there. I wouldn’t expect a U2 fan to recognise this music as that of Edge and Bono, except on a couple of tracks. It is not really to do with U2, it’s a different attitude. In fact, not only is it not U2 music, it’s not really Bono and Edge music either — if we have a style, we definitely laid it aside for this project.” Over some of the instrumental pieces were samples from different songs, as well as some pieces of lyrics by Bono, including a snippet of “(We Don’t Need This) Fascist Groove Thang” a song originally recorded by Heaven 17. Heaven 17 had taken their name from the original book A Clockwork Orange so the snippet brought things full circle. A male choir was also used on some pieces consisting of Martin McGlynn, Emmanuel Lawler, Eugene Griffin, Martin Higgins, Desmond Capliss and Conor O’Reilly. The music contributed by Bono and The Edge included percussion by Noel Eccles, keyboards by Paul Barrett, and was engineered by Ian Bryan at STS Studios in Dublin.

AUDIO: Alex Descends Into Hell for a Bottle of Milk

Only one song was ever released from the project, the song, “Alex Descends Into Hell for a Bottle of Milk / KOROVA 1” which was a medley of two longer pieces developed for the play. In U2 by U2 Edge talks about the research which played into the piece, “As research for Clockwork Orange, I was listening to a lot of industrial music, noisy and abrasive sounds built around drum machines and clangorous sonic distortion. I was really getting into these harsh recordings by bands such as KMFDM, The Young Gods and Einstürzende Neubauten.” Those influences can be heard on the song.

IMAGE: A Clockwork Orange 2004 First Programme from the Barbican Theatre

The play itself was directed by Ron Daniels. The play initially opened at the Barbican Theatre in London England, with the press night being February 6, 1990. Music was listed as being by Bono and The Edge, with Paul Barrett being named as the arranger in the program. The British government refused a requested increase in funding to the Royal Shakespeare Company resulting in the closing of that theatre, and the play would have to move to a second theatre. Even though the play was a hit, the decision to close the theatre was made before the show even had its public debut. The play opened officially on April 23, 1990 at The Royalty Theatre in London where it ran until May 26, 1990. In all, the play lasted less than three months.

The play ran for two and a half hours, and included a fifteen minute intermission. All told, about 30 minutes of music by Bono and The Edge was heard in the production. The programme for the play also listed that the feature included excerpts from Ludwig van Beethoven’s Symphony No. 9 played by the Berlin Philharmonic Orchestra and Johann Sebastian Bach’s Wachet Auf, Magnificat and Cantata 140 played by the Munich Back Choir and Orchestra. 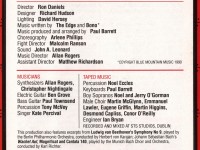 Reviews of the show were not kind, with The Sunday Telegraph calling it “a clockwork lemon,” and The Sunday Times saying it was “only an intellectual Rocky Horror Show.” Anthony Burgess, who wrote the original novel wasn’t kind about the U2 music calling it “neo-wallpaper” in The Evening Standard. Sight & Sound commented on the music saying “the music by two members of the Irish group U2 (The Edge and Bono), is so much unmemorable percussive rock, and the choreography by Arlene Phillips is commonplace disco-dancing.”

Asked about releasing the soundtrack or further music from the piece, The Edge said, “There are no plans to release the soundtrack and I like the idea that this music only exists in the theatre context — that’s what we wrote it for and I don’t think it would make a great record without major reworking.” He didn’t seem concerned about the reviews either. “The finished production of A Clockwork Orange 2004 show, which I’ve seen four times, is very good, but oddly, I felt the rehearsals we saw actually had more fire about them and that perhaps the staging and set dissipated some of the energy. Having said that, it did get better every night I saw it. Phil Daniels, who plays Alex and who we got to know has done an incredible job on stage in making the character so believable.”

Thirty years later, it looks like we are unlikely to get additional music from the production, but we have been happy to share a little bit more than many have heard before. We hope you enjoyed a look back at the production, and plan on documenting a few other side projects in the coming months.

IMAGE: A Clockwork Orange 2004 Bono and The Edge biographies from Second Programme