Edge and Larry with The Drifting Cowboys

We’ve been digging up some information on U2’s earliest days for a project we have been working on. Earlier this week we shared the details of U2’s first demo recording session and the ten songs that they recorded. Today we’re looking at The Edge and Larry Mullen’s first paid show as musicians, not with U2, but with a band called The Drifting Cowboys. 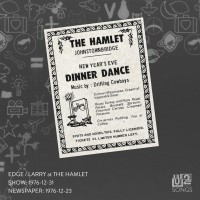 The band was a Country and Western show band. They would play popular music from other artists, and no originals. The Drifting Cowboys had been together before U2 formed at Mount Temple Comprehensive, with advertisements for shows starting in May 1976 in the Irish press. The band took their name from the backing band that had played with Hank Williams, but this Drifting Cowboys never played with Williams. The Drifting Cowboys were based in Dublin, and were fronted by Eric Stone as lead singer. The band had a fluid membership, often relying on local musicians to sub in as members came in and out of the band.

In an interview with BP Fallon in 1992, The Edge was asked “Have you ever told a lie?” and his response brought back memories of his time with the Drifting Cowboys:

“Oh yes. The biggest one is “Yes I can play” when I got my first paying gig, playing with The Drifting Cowboys. They were a country band who played in the heartland of Ireland, doing songs by people I hated at the time, people like George Jones and Hank Williams who since I’ve grown to love. Larry and myself played a few gigs with them, and my brother Dik too. Larry fell asleep one New Year’s Eve at 3 a.m. playing the drums and nobody noticed.”

Not much was said about The Drifting Cowboys until U2 took questions from fans ahead of The Joshua Tree 2017 tour. During the question and answer session, the band were asked about the Dalton Brothers, a ‘fake’ band that U2 had performed as during a number of shows in 1987, opening their own concerts.

The Edge answered, “Very few people know actually, Larry and I got paid for performing for the very first time in a country band. Country music was huge in Ireland, still is. I bought a guitar from a fellow called Eric Stone, who had a band called Drifting Cowboys. He approached me and said “would you and your drummer like to come and play?” Our agent made a couple of bookings, so Larry and me got paid for the very first time for climbing on stage performing country songs. This would have been about ’77. We were children. We got ten quid each. Which was big.”

Bono returned to that information a number of times in 2017 and 2019. In 2017 Bono brought up the band and told the audience that Edge and Larry had performed with them when they were 15 and 14. But it was in 2019 we got many new details about the performances, as Bono stopped the show ahead of “Trip Through Your Wires” to ask Larry or The Edge about their time in the Cowboys on many nights, including shows in Auckland, Melbourne, Perth and Manila. Some even doubted that the stories being told were true, but they indeed did happen!

During those shows Larry and The Edge shared:

That New Year’s Eve show that Larry famously fell asleep behind the drum kit? The Drifting Cowboys played a New Year’s Eve show on December 31, 1976 at The Hamlet, located in Johnstownbridge, in Kildare. (About a 50 minute drive to the West of Dublin.) It’s the only show that fits the timeline, and there is no listing of them having played a New Year’s Eve show in 1977 itself, and by that time Edge and Larry had been paid to perform at their own shows. The Edge mentioned they had done a couple of bookings with the band, so it is likely that they also played the January 2, 1977 show at the same venue.

The show on New Year’s Eve was a dinner / dance, with a menu that featured salmon mayonnaise, cream of vegetable soup, roast turkey and ham, roast potato, brussel sprouts, creamed carrots, creamed potatoes, Christmas pudding, and tea or coffee. The event was fully licensed, and tickets were £4 each. The January 2 show was an early show and also fully licensed at the same venue.

If Larry Mullen or The Edge played shows beyond the two with The Drifting Cowboys it is unknown, but it sounds unlikely. The next known shows that the Drifting Cowboys played were at the end of January, again visiting small venues on the outskirts of Dublin. They continued to play venues throughout Dublin for a number of years, with the last advertisements for the band appearing up until 1984.