For Your Consideration: New Printing of Songs of Experience for Awards Season

Musical awards season is about to start full force. And today we want to take a look at the process from releasing an album, to becoming a nominated recording. We will also take a look at U2’s attempts to get people to consider “You’re The Best Thing About Me” and Songs of Experience for Grammy Awards, including a look at a special pressing of the album that is currently being sent out to music influencers who are likely to be part of the Academy voting panel.

The 61st Edition of the Grammy Awards will air on February 10, 2019. That’s just over five months away. And already there is ongoing activity surrounding that awards ceremony. Only recordings released between October 1, 2017 and September 30, 2018 will be eligible for this years awards. Songs of Experience, released on December 1, 2017, is eligible for this years awards ceremony. The album has already been submitted to the Recording Academy for consideration for nominations. There are two submission periods, one in July and one in August 2017. The Recording Academy Awards department reviews each entry to confirm eligibility and once eligibility has been confirmed, submissions are then sorted by genre-based sorting committees, to ensure all recordings are listed in their proper category on the first-round ballot.

A second round of voting from December 13, 2018 – January 9, 2019 will decide the winners of the Awards, which are then presented live on February 10, 2019. However, as the Recording Academy does not disclose contact information of their members this is done somewhat blindly. Artists are not allowed to campaign for nominations in specific categories and fields. And during balloting season, which starts in September, vote solicitation and product distribution cannot be done at Recording Academy events.

IMAGE: You’re The Best Thing About Me Advertisement

Last year, U2 did campaign for a nomination for the single “You’re The Best Thing About Me” placing advertisements in several industry publications. The ad was simple, featuring the single cover with the note:

New Single “You’re The Best Thing About Me” For Your Consideration.

That appearance was likely the start of the campaign for this year’s Award show, as nothing makes an impression on your fellow Academy members like performing in front of them. 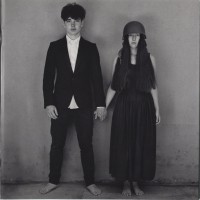 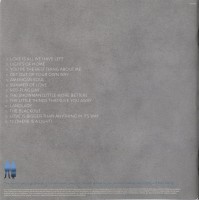 IMAGES: Front and back covers of new Songs of Experience printing

But there’s a bigger campaign underway to bring attention to last years release of Songs of Experience. In late July a special edition of the album has been sent out to many in the Recording industry. We are unsure of exact numbers that have been printed but we expect that these have been widely distributed to get as many ears listening to the album as possible. The more people who are listening, or know of the album, the more chances someone may vote for the album in the upcoming awards. The CD contained within is nothing more than a commercial pressing of the album. These are a mix of different matrix numbers, and appear to be a mix of CDs pressed for this promotion, as well as possible returns to the record label from the initial release. The content on each is the same as the commercially released album from last fall, there are no extra tracks, and this is the regular edition of the CD which ends with “13 (There is a Light)”. 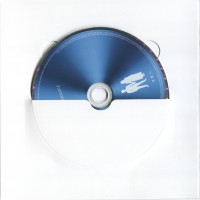 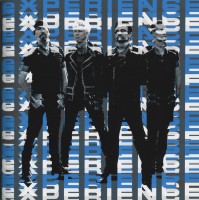 IMAGES: CD inside and new image from new printing of Songs of Experience

It is the packaging which is interesting. First of all the CD is packaged into a gorgeous booklet which is 7-Inch by 7-Inch and looks like a 7-Inch single. The front and back look similar to the commercial release of the album, including the quote at the bottom of the back cover. The CD itself is held in a pocket inside the booklet. 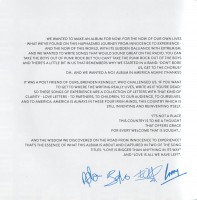 IMAGES: Letter from U2 in new printing of Songs of Experience

The booklet itself for the most part replicates the original booklet. However there are some additions. A full page photo of the band with a repeating logo stating “EXPERIENCE” is across from the CD pocket. The next page includes a personal note from the band which is signed by all four members (these are printed autographs and not actual signatures). The note reads:

We wanted to make an album for now. For the now of our own lives – what we’ve found on this haphazard journey from innocence to experience – and the now of this world, with its sudden dalliance with extremism. And we wanted to write songs that would sound great on the radio. You can take the boys out of punk rock but you can’t take the punk rock out of the boys and there’s a little bit in us that remember why we started in a band: ‘don’t bore us, get to the chorus!’ Oh..And we wanted a No.1 album in America again! (Thanks!)

It was a poet friend of ours, Brendan Kennelly, who challenged us: ‘If you want to get to where the writing really lives, write as if you’re dead.’ So these songs of experience are a collection of letters with that kind of clarity – love letters – to partners, to children, to our audience, to ourselves. And to America. America is always in these four Irish minds, this country which is still inventing and reinventing itself.

‘It’s not a place, this country to me a thought, that offers grace, for every welcome that is sought…’

And the wisdom we discovered on the road from innocence to experience? That’s the essence of what this album is about and captured in two of the song titles. “Love is Bigger than Anything in its Way” and “Love is All We Have Left”. 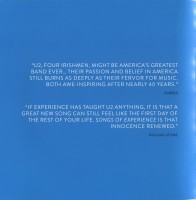 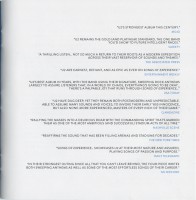 After that, the bands names follow. The booklet holds other surprises as you continue. A two page spread of quotes from the media about the album are featured including quotes from reviews by Forbes, Rolling Stone, MOJO, Variety, The Associated Press, Entertainment Weekly, USA Today, Q Magazine, Nashville Scene, The New York Times, Daily Telegraph and No Ripcord. 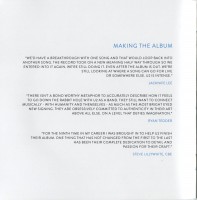 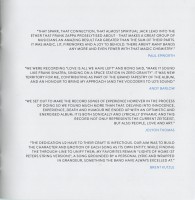 There is also a “Making the Album” two page spread with quotes about the recording process from the producers who put together the album. Jacknife Lee, Ryan Tedder, Steve Lillywhite, Paul Epworth, Andy Barlow, Jolyon Thomas and Brent Kutzle are all quoted here. My own favorite quote that I had not heard before comes from Andy Barlow:

We were recording “Love is All We Have Left” and Bono said, “Make it sound like Frank Sinatra, singing on a space station in zero gravity”. It was new territory for me, contributing as part of the grand tapestry of the album, and an honour to bring my approach (and the vocoder!) to U2’s sound. 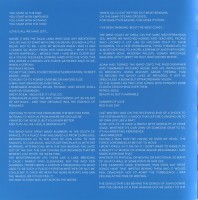 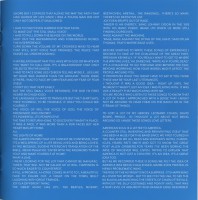 IMAGE: Liner notes from new printing of Songs of Experience

The album does contain pages found in the original booklet including Bono’s liner notes, at a readable size. There is also a link present for readers to view the video of “Liner Notes” online instead of reading along. The credits for the album are present. The large photo of the band in the industrial setting is present. We’ve included some of the newer pages from the booklet throughout the article. If you haven’t, click on any of them to see a larger version that can be read.

As with anything of this nature, some receiving the booklets have not wanted them. A few have begun to show up on auction sites, and at other used CD retailers. On eBay they’ve gone for a wide variety of prices from $36 US, all the way up to $898 US, but most have been between $200-300 US. We expect with the number of these that have been sent out, that after awards votes are cast, many more will make their way to auction and these prices will drop. But with any For Your Consideration item they do usually maintain some value over time. As can be seen from the excerpts above, these booklets are very oriented towards the American awards, it remains to be seen if something similar will be produced for other major awards shows such as the Brit Awards.

The Grammy Awards aren’t the only upcoming music awards in the USA. The 2018 American Music Awards are broadcast on October 9, 2018. Unlike the Grammy Awards, the American Music Awards are voted on by fans, after being nominated based on criteria provided by Billboard including streaming, sales, airplay, social activity and touring. U2 have been nominated for Tour of the Year. It is their only nomination. As these are fan-voted awards, you can vote for U2 in this category online, or by posting a tweet with the name of the nominee or Twitter handle, the category name and the hashtag #AMAs. If you wish to vote for U2 you would tweet something like this, “I vote for @U2 in the category of Tour of the Year #AMAs”.

If you are interested in more information about other pressings of U2 items for Awards consideration, in 2016 we looked back at other such items in our History Mix.