Live Track to Feature in MOJO 321

Announced today, U2 will feature in an upcoming CD that will be published with issue 321 of MOJO Magazine. The CD is advertised as featuring “15 rare and unreleased live tracks from U2, Foo Fighters, Nick Cave, Wilco, New Order etc.” and the CD is called “The MOJO Festival 2020.” The U2 track will be a rare one, but not an exclusive one. The song featuring U2 live will be a version of “The Little Things That Give You Away,” recorded in Rome in 2017, and previously featured on the Live Songs of Innocence + Experience fan club gift in 2019.

The CD will contain fifteen tracks. The CD will be in a card sleeve, and attached to the cover of the August 2020 issue of MOJO in shops. 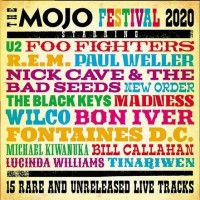 In the magazine in a description of the U2 track, MOJO writes, “Only the most fastidious U2 collectors will own this version of the Songs Of Experience highlight: a July 2017 recording from Rome’s Olympic Stadium heard on Live Songs Of iNNOCENCE + eXPERIENCE, for fan club subscribers, in 2019. Hear Bono in Italian, near the end.”

U2 were also featured in a MOJO covermount CD in September 2018, when an alternate mix of “Lights of Home“ by Spike Stent was published in the 300th issue of the magazine. The last covermount CD participation by the band prior to that was a Q Magazine compilation in 2011 celebrating the 20th anniversary of Achtung Baby.

For those interested in this CD, MOJO does sell issues online through Great Magazines in the UK, and this newest issue is now available for pre-order, and worldwide delivery.