U2 surprised many earlier today with the announcement of a new show in Manila, which is the first time U2 will perform in the Philippines in their career. The band is also playing in South Korea and Singapore for the first time on this upcoming tour. The Manila show is December 11, 2019. The show was announced with a hand written note from Bono which read, “December 11, Manila, Manila ♡ U2, U2 ♡ Manila. Bono, Edge, Adam and Larry coming to rock you hard and soft…loud & vivid, black & white & colour. Dec. 11” The band will play the Philippine Arena in Manila and ticket presales will begin on September 1 for U2.Com members, with a general sale starting on September 5.

The show promises to be a small and intimate one for those on the floor, with one of the smaller floor areas on any of the venues. The Philippine Arena is an indoor arena, with maximum capacity of 55,000, but as the seat map shows, the floor area for this concert configuration will be quite small. (Seating capacity is 51,929) The venue was completed in 2014, and was recognized by the Guinness World Records as the largest mixed-use indoor theatre, with a bowl shaped arena, and a stage at one end.

For those trying to get to the final show on the tour, this has not been the first time U2 has announced another show at the end. In 2011, Pittsburgh was listed as the final show of the U2360 tour but months later was replaced with Moncton. In 2018 New York was set to end the first leg of the Experience and Innocence tour, but months later was replaced with Uncasville. And in 2017, Brussels was set to be the end of the tour for the longest time, before two additional legs were added. This doesn’t even include shows that shifted to the end of the tour in 2015 and 2018 due to circumstances out of U2’s control (Paris and Berlin.)

For those wanting to attend the final show, don’t count on Manila being the only show that gets announced. We are told that it is likely that one additional show, likely on December 14, is being worked on. We are told that this will be in Asia if it does happen, close to the other cities that have already been announced. Hopefully if they plan to announce an additional show, information will be made available before the September 1 onsale for the Manila show. At this time there is no expectation that the tour will continue into 2020.

Last week we told you that the decision about the second show in Seoul would be made this week. The show was rumoured for some time, but will not happen, and arrangements were made to add an additional show in the region. The show in Manila was not planned when the tour was originally announced in May, and is a later addition to the tour itinerary. As we like to remind people, U2 has been known to alter and change tour routings even after the tour has been announced, and it appears Manila was a more recent addition.

We are in the process of updating our show listings, and other concert information to include this show.

Over on the U2Start forums, a user, jick has posted the following image of pricing and layout of the Philippine show. Thank you jick! 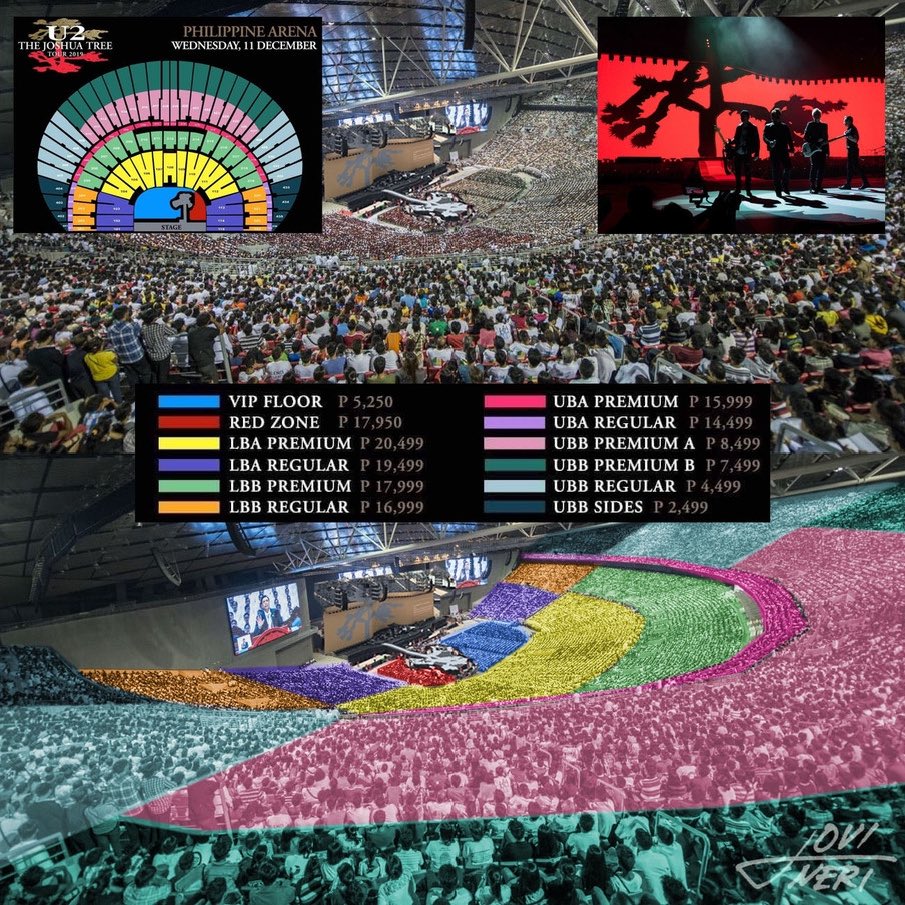