No Line on the Horizon Remaster for the 10th Anniversary

No Line on the Horizon is being released for the 10th anniversary of the album, and the album will be fully remastered, and will be released with two additional remixes on the vinyl. It is being released in two different formats, a regular black vinyl pressing that will be kept in print, and a limited edition clear vinyl.

IMAGE: Black vinyl release of No Line on the Horizon (Image: U2.com)

The album is remastered, and will be released on February 22, 2019. Both versions of the album can be ordered now through the store at U2.Com. Both versions are now starting to appear at other online shops as well including various Amazon storefronts and Universal storefronts in various countries, Bullmoose Records and other independent stores. Unlike the recent blue Zooropa and gold The Joshua Tree, it does not appear that the clear version will be an exclusive to any one retailer.

The press release for this remastered set reads:

IMAGE: Clear vinyl release of No Line on the Horizon (Image: U2.com)

This is the latest in a long line of reissues on vinyl, a program that started in 2017 with a reissue of How to Dismantle an Atomic Bomb and War on vinyl on March 31, 2017. When that set was released, we were told that the full back catalog would be reissued, with a few new vinyl issues each month.

To date the schedule has been:

Also more recently, have been two special coloured vinyl releases of Zooropa and The Joshua Tree, released on November 23, 2018 in most of the world, with earlier releases in Germany and the UK. Many of our discography entries for these releases can be found in the discography entry for albums, down under “Reissues and Remasters”. 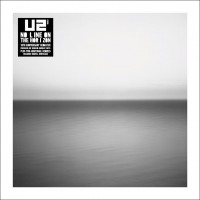 IMAGE: Cover of the Remastered Vinyl Coming in February

The albums Boy, October, Under a Blood Red Sky, and The Unforgettable Fire have been kept in print since their initial release on vinyl in 2008 – 2009. The Joshua Tree was reissued in 2017 for the thirtieth anniversary of that album in a variety of formats including a 2-vinyl set. Initially we were told Rattle and Hum would be released this fall and No Line on the Horizon would be the final release next spring. It appears that Rattle and Hum was removed from the schedule and they will continue on directly to No Line on the Horizon as the next release. At this time we do not know when, or if Rattle and Hum will be rescheduled, but we will let you know as any information becomes available.

Many of U2’s albums have been out of print for a number of years, leading to high prices on the collectors market. No Line on the Horizon, Rattle and Hum, and the Passengers album Original Soundtracks 1 are the three albums which have not been widely repressed, or kept in print in recent years. These newer pressings are done with new catalog numbers and information on the album itself, on a high quality vinyl, and are pressed for the worldwide market. If your shop or online store stocked the earlier re-releases, it should stock this new one.

This is the first time that a coloured vinyl and a black vinyl version of an album re-release have been issued on the same day.

Many thanks to Davide P for some information used in this article.