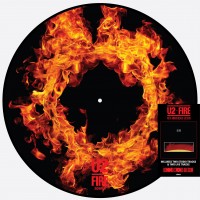 Record Store Day 2021 is being split into two events, one on June 12, and one on July 17. The split is an attempt to manage crowd sizes in retail stores. The day has also been delayed from the usual April date in hopes that would help with the Covid-19 issues.

“Island Records and UMC today announce the 40th anniversary vinyl release of Fire, a newly remastered picture disc edition to celebrate Record Store Day on Saturday 12th June 2021. Recorded in spring 1981 during a break on the Boy Tour, Fire was originally released as the first single from U2’s second studio album ‘October’ in July of that year, with J Swallow as the B-side. This 40th anniversary picture disc vinyl edition features both Fire and J Swallow on Side A, plus two live recordings of Fire on Side B. The first is from Werchter Festival in Belgium in July 1982, the second is taken from a BBC recording at the Hammersmith Palais, London in December 1982. All tracks have been newly remastered. 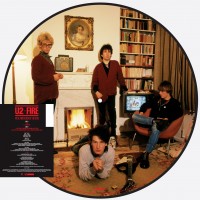 U2 will also appear on two other Record Store Day releases this year with the reissues of the Lara Croft: Tomb Raider soundtrack and Red, Hot and Blue albums. Both of those releases will be available the same day as the “Fire” single, June 12, 2021. The first contains the “Tomb Raider Mix” of “Elevation” and the second contains U2’s cover of “Night and Day.” Lara Croft: Tomb Raider will be on metallic gold vinyl. The release of Red, Hot and Blue was originally announced for late 2020, but had been delayed, and then rescheduled for Record Store Day.

U2 has participated in Record Store Day events a number of times since the Black Friday event in 2010. Most years they have released exclusive vinyl, the full list of releases is as follows:

We maintain a full list of all of these releases in our discography, including artwork, track details and more.

Traditionally when a U2 release is announced for RSD we get a number of questions about the event and we’ll attempt to answer a few of these below. We will dive right in on the answers, but before we do, we wish you all good luck if you attempt to find a copy of this release on Record Store Day!

We’re going to dive right in…But before we do, we wish you all good luck if you are attempting to find a copy of this release on Saturday!

What is a Record Store Day Drop?

Last year in the midst of the pandemic, Record Store Day was split into three days in an attempt to reduce crowds coming into independent record stores. They called each of these three days a “Drop” – and for 2021, they are planning on repeating this. The day will be split into two days, June 12 and July 17. Each day will have different titles available.

What is U2 releasing?

How many copies will be released?

For non-numbered items, we only have the amounts listed on the Record Store Day website to go by. This new release is being listed at 7500 copies, which means it is being pressed in smaller quantities than “Three” (17000 copies) and larger quantities than “The Europa EP” (5000 copies). Both “Hold Me, Thrill Me, Kiss Me, Kill Me” and “Red Hill Mining Town” were pressed at 7000 copies for comparison.

How many copies of items were released in the past?

We do track these items in the U2 discography which includes information and pictures of each release. You can find the full list including quantities here.

How Much will the Record Cost?

Stores are allowed to set their own pricing on Record Store Day items, so the price may vary depending on what store you go to. However, Record Store Day guidelines ask that stores pay attention to list pricing and stay within 20% of the suggested retail price. We will update with some pricing points once stores have published that information.

Can I pre-order / reserve the U2 release?

Items for Record Store Day are not generally available for pre-order, as the whole point of the day is to get customers into stores.

From the recordstoreday.co.uk FAQ: Stores are bound by the Record Store Day code of conduct which prohibits them reserving product for customers or allowing customers to pre-order product. Record Store Day is about the occasion and visiting the store is part of the enjoyment so our best advice is get up early and check with stores in advance that they have your product. The rules are strictest in the UK, Canada and the USA. In other countries they can be a little more relaxed and there are reports each year that some stores do take pre-orders.

Can I buy the U2 release online?

Stores are also prohibited from selling online in advance of Record Store Day. Usually in the UK and USA stores are asked not to sell product online for one week after the event has started. However, due to COVID-19, Record Store Day relaxed this requirement last fall, and allowed stores to put records online the same day that they opened for in person sales. In the UK, stores started selling online or via phone at 6pm. In North America stores were asked to wait until afternoon in their local time zones, with in-person only sales when the stores first opened. This will be repeated for this year. Some stores in the UK are already publicizing that items will be available online at 6pm GMT.

How do I shop for this record?

COVID-19 has changed the world. And you may find things aren’t as you usually find them at your shop. Some stores will offer bookable time slots, some will operate socially distant queues, some will open as usual but will limit the customers in the shop. And since regulations and restrictions are different everywhere in the world, you are best off to check with the shop you expect to go to in advance. As we get closer to the date shops will post more detailed plans online. Fans in the UK are encouraged to use the RSD Store Locator. In the USA, this page has additional individual store information.

Why is the U2 release already available on eBay at super high prices?

There are copies already on eBay for prices that look crazy minutes after the announcement. Due to the limited nature of these releases, some users of eBay will assume they will get a copy of the vinyl on Record Store Day and list the vinyl in advance in order to get high prices. This is one of the downsides of Record Store Day. These people do not actually have the product to sell in most cases, nor will they be shipping it out before Record Store Day. And in some cases, come the actual day, they will not get their ‘allotment’ and will end up cancelling auctions.

From the Record Store Day site:

“When you see a title listed on an auction site before RSD, it’s almost CERTAINLY someone who has listed something they do not have in hand, and can’t guarantee they will have in hand, because they’re going out to a store to try and get it like everyone else. They call it a “pre-order” but since they’re not getting distributed to, it’s not a pre-order. It’s more like a scam, really. We work very hard to investigate the listings and in the tiny percentage of the time over the past ten years that it has been a store behind it, there have been serious implications for that store.”

Will this item really be worth these crazy amounts?

People set high prices on eBay when these items are announced, but it is rare that they stay that high. Once stores start selling the item you will see a bunch of listings pop up at lower more reasonable prices.The exception has been super limited items like the black and white pressing of “The Blackout” and the orange limited booklet with “Red Hill Mining Town” which both still fetch high prices. Most of the more recent items have been listed in advance around $100, and quickly dropped down in price the day of the event.

Will the U2 release be available in my country?

Record Store Day has expanded over the years, and is more than just a USA event where it started. That being said, not every country has a Record Store Day, and even if they do have a record store day, they may not get all of the releases. Below are a list of the links to individual country sites for Record Store Day:

Additionally some international store listings are available on the Record Store Day site and can be found here.

Will all Record Shops get this release?

We know many of you will not get this release in your own country and will have to explore other avenues to find a copy. This was a big concern in other years as well. Record Store Day continues to expand throughout the world, and there are more countries participating now than there were the last time U2 released an album in this manner. Last fall was the first time we saw releases available at multiple shops throughout South America. As we get closer to the release, and stores do start to offer this item online we hope to be able to share those links with you to make it easier for you to find a copy.