Achtung Baby turns 30 this year. Originally released on November 18, 1991, the album is a favourite of many U2 fans and it is hard to find a corner of the internet where people aren’t looking at the anniversary and wondering how U2 might mark it.

We have been told that the band has recently started to put together their plans to mark the anniversary. Over the last month they’ve been putting ideas together to celebrate Achtung Baby and we are told that there will be a focus on some sort of new digital experience to celebrate the album. Not only will they celebrate the album, but we are told we will get a deeper look at the birth of the album, and the album’s roots in Berlin. Expect an announcement late in August in regards to full details of the plans to celebrate the 30th anniversary of the album. The celebrations should take place in mid-November.

One thing we have been told will not be part of the plans is a thirtieth anniversary tour. Although the band recently celebrated the 30th anniversary of The Joshua Tree in that manner, plans are not to do a second such tour according to previous reliable sources.

That’s not to say that Achtung Baby and its ground breaking ZOO TV Tour have not already been celebrated in more indirect ways over the years. We are not talking about the songs being part of the set list in subsequent tours of course, that is a natural progression in U2’s evolution. We are referring to the subtle nods to the record, tour, and their various themes throughout the years.

Towards the end of the 360 Tour in 2011, and close to the 20th anniversary of Achtung Baby, the shows would start with a block of “Even Better Than The Real Thing” / “The Fly” / “Mysterious Ways” / “Until The End Of The World”. Sometimes with some “Tryin’ To Throw Your Arms Around The World” sprinkled in. In fact, “Even Better Than The Real Thing” was the then unreleased Fish Out Of Water Remix, which was part of the 20th anniversary, released 3 months after the end of the 360 Tour.

When U2 headlined Glastonbury in June 2011, the songs, and visuals paid homage to many of their previous tours, among which ZOO TV was also present. The set opened with the same songs mentioned above, followed by “One”. The videos playing during “The Fly” / “Mysterious Ways” / “One” are taken directly off the ZOO TV Tour, and for some of them this was the first time they had re-surfaced since that tour.

Fast forward a few years, and as The eXPERIENCE + iNNOCENCE Tour visits Europe in 2018, the theme of unity vs division is again very prominent. So much so, that an entire ZOO TV Tour block enters the setlist: “Dirty Day” / “Zoo Station” / “The Fly” / “Stay (Faraway, So Close!)” / “Who’s Gonna Ride Your Wild Horses”. The visits to an Achtung Baby era don’t stop here, but we have a piece to finish, and we could do this all day! We do invite the long time fans to ping us with more references in the live shows that may come to mind though… 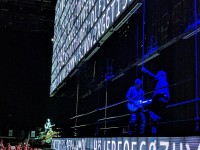 The 20th anniversary of Achtung Baby was marked in 2011 with a number of collections. The album was issued over five different formats, and included a number of unreleased tracks, live and documentary footage, remixes and more. The five physical formats included a single CD featuring just the album, a deluxe 2-CD set where the extra disc came with B-Sides and a few remixes. The vinyl box set included the album on 2-LP in black vinyl, and 2 LPs of remixes on blue vinyl. A super deluxe edition included 6 audio CDs, 4 DVDs, a 92 page book, art prints all in an outer slipcase. The six CDs included Achtung Baby and Zooropa as well as two discs of remixes, a disc of B-Sides, and a disc of early demos of the songs. The four DVDs included From the Sky Down, a disc of promotional videos for the album, a disc of documentaries and other specials, and also included Zoo TV Live from Sydney. 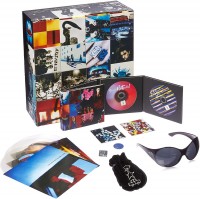 The final format was the so called Uber Box. This massive box included all of the discs found in the super deluxe edition (6 audio CDs, 4 DVDs) but added the black vinyl version of the album over two discs, and also included all five vinyl singles pressed in clear vinyl as 7-inch records. It also included a hardback book, Fly sunglasses, 4 enamel badges, a replica of the Achtung Baby magazine, 16 art prints, a set of stickers, and if ordered direct from Universal, also included a numbered lithograph. The set was packed in a large box with different layers, and a drawer that pulled out. Attached to the box? 16 magnets which allowed you to recreate the album cover on the surface of the box, or rearrange them as wanted. (The box did not include the two blue vinyl remix albums that were available in the vinyl box.)

Not only did the album get released, U2 worked with filmmaker Davis Guggenheim to film a documentary called From the Sky Down. The film debuted at the Toronto Film Festival that year, and was shown on television on BBC, Showtime, and other stations. The film was released in the Uber box set celebrating the anniversary of the album, but was also released as a standalone DVD and Blu-ray on December 12, 2011. The film focused on the album Achtung Baby and delved into the making of the album. For the film the band filmed a number of new pieces, including interviews with the band, they returned to Hansa Studios and filmed some songs from the album, and filmed additional songs in a theatre in Winnipeg while the band were rehearsing for the Glastonbury Festival. Two cuts exist, a 74-minute version which was included in the Uber box and shown on television, and a longer 85-minute cut of the film, which was sold separate on Blue-ray and DVD. The longer version contains additional footage of the band performing at Hansa, and a question and answer session from the Toronto International Film Festival where Bono and The Edge took questions about the album.

More recently the band also revisited the album in 2018. With the vinyl version of the album out of print, a new version of the album on black vinyl was released as a standalone item. The release is split across two discs as it had been in the Uber box, and the vinyl box set issued in 2011. But the 2018 release is a new master of the record. In 2011 the band hesitated to call the release a remaster, as only small tweaks had been done to the sound and the levels on the album. This wasn’t the case in 2018, and the album is remastered, and that remastering was directed by The Edge. Earlier this year, on April 28, 2021, a new pressing of this master was released worldwide on vinyl. It is the same as the 2018 edition, and includes the same catalog number. The only distinguishable visual difference was the lack of a hype sticker on the front of the vinyl. These were pressed to ensure there were quantities to fill ongoing store interest in the title.

As to what they may release to mark the anniversary, details are slim, and the only project discussed for a Fall release has been an acoustic recording of songs. Adam Clayton has mentioned that twice now. In June, interviewed for a Record Store Day Special by Rocky O’Riordan, Adam spoke about the project, “Well, you know we are playing around with rearranging some of the songs that we have and setting them in a more acoustic environment. Edge got a bit of a bee in his bonnet and said you know, no pun intended, said lets look at these songs and imagine them in a different context. So we are playing around with that. He’s putting a lot of work into changing the keys, and moving them onto piano and that sort of thing. And hopefully we will have something towards the end of the year that will show a different light on U2. I think it’s an opportunity to explore different versions of the band in a way. Because it’s very much the early days, it’s embryonic, it could go somewhere between Leonard Cohen or Johnny Cash – very stripped down and bare – towards something that is very lush. Very hard to say where it will end up or if it will all end up with the same tone across it, or if each song will be treated differently. I’m excited to see how the songs could exist in a different universe.”

Again this weekend, Adam mentioned this project again in a Rockonteurs podcast, recorded earlier this month, “Well I think it’s very difficult for us to think about a plan, because we always think about touring. And at the moment I don’t think that’s likely. Obviously it will open up and touring will happen. We have been doing various things. We have been recording acoustic versions of some of our catalog in different keys and different tempos just as a challenge.” He does not reveal what the project is they are working on but seems to clarify these are older songs the band is working on. Perhaps this material will be used for additional material for any sort of Achtung Baby issue. It could also be for something else, and we have also previously been told that the band are working on a compilation album which may tie into the eventual opening of the U2 X-hibition in Dublin.

Whatever the band is planning for November, we’ll be tuning in. Achtung Baby is one of the releases which has yet to be released in coloured vinyl. It originally appeared on the release schedule in coloured vinyl for last Spring, but later disappeared. The band still likely has some unreleased demos and B-Sides floating around. And although Sydney 1993 seems to be their go-to live show from the era, there must be some other shows in the archive that could be polished up as a bonus which would make many fans happy. Whatever is planned, we’ll try to bring you more news as we get it. 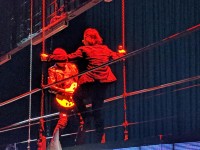