Sing 2 has now debuted in most countries, with only a few places left to go. In some countries the home video releases are now hitting stores. In the film Bono plays a retired rock star who has to be convinced back to perform. The character, Clay Calloway, is a lion. Most kids films would come with a deluge of merchandise in shops, but the campaign for Sing 2 has been more understated, perhaps due to the pandemic and continued worries about supply chains. Those items that were put out in North America had few appearances by Clay Calloway. In this article we’re going to look at some of the upcoming video releases, toys and other tie ins. 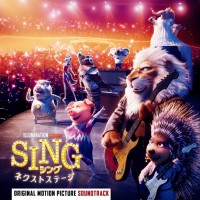 The soundtrack to the film includes U2’s new track “Your Song Saved My Life” as well as Bono’s duet with Scarlett Johannson on “I Still Haven’t Found What I’m Looking For”. Also included is Scarlett singing “Stuck in a Moment You Can’t Get Out of” and members of the cast singing “Where the Streets Have No Name”. The soundtrack was released on CD back in December. A vinyl release followed at the end of January in black vinyl in most locations, although there was a special purple-marbled version released through Target Stores in the US. There’s a new version out in Japan on CD this month, featuring a new cover. There is a bonus track included which is reported to be the Japanese cast of the film singing a yet unidentified track.

The home video release is coming in a number of formats on March 29 in North America. The film will include two mini-movies (One featuring Gunther, and one featuring Darius), outtakes from the film, how to draw features and Sing-alongs. The Sing-alongs will feature the songs from the film with lyrics over top of the action so people can sing along at home. One note, the Blu-ray and 4K formats will include more added features than the DVD will. For example, there will be “How to Draw” features on both the DVD and Blu-Ray, but the Clay Calloway feature will only be on the Blu-Ray. 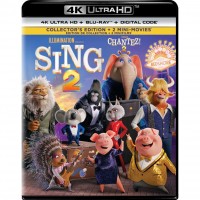 There will be home video releases in the UK and other countries, but we only have information about the North American dates right now. (We are told the Australian release in physical formats is March 30, thank you Lauren!) The formats planned for the UK look very similar to the North American offerings at this time.

Many of the toys identified so far have been promotional tie-ins at various companies. These are items given out when you buy another item such as a box of cereal, or a meal at a fast food restaurant.

McDonald’s is the big tie-in for most countries. In the UK, US and most of Europe, McDonald’s has transitioned from plastic toys to more environmentally friendly paper toys. As part of the Happy Meals there you could get a Clay Calloway paper toy, which comes in an outer paper envelope, and opens to show a 3-D scene of Clay Calloway on his motorcycle. And although the toy is the same inside the envelope for those looking closely, the envelope they come in come with different text on the back. We’ve identifed a US version, a UK version, and a third version being used throughout Europe. 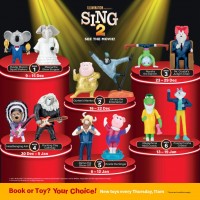 A number of countries still have plastic toys, and there were plastic Sing 2 toys as well, including a Clay Calloway toy in some countries. Clay was issued in Singapore, Australia and New Zealand, Philippines, and Hong Kong. The toy included in each country is the same, but the plastic bag they are distributed in has different text in each of these countries. Not all of the countries that got plastic toys carried the full line. Canada for instance carried a smaller line of these toys, which didn’t include Clay Calloway. 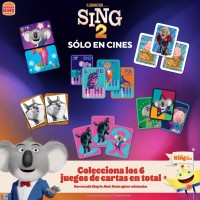 In Germany, Mexico, Honduras, and other countries the tie-in was via Burger King, and like other countries in Europe, they’ve transitioned to environmentally friendly toys. The Sing 2 toy is a card game, featuring a number of cards with various characters, as well as a cardboard box you can build to store the cards. There are six different card games to collect, “Tic-Tac-Show”, “Headshots”, “Costume Confusion”, “Find Clay Calloway”, “Starstruck” and “Octaves”. Clay doesn’t appear in all of the sets, but he is in two. He’s in the “Headshots” game, and in the “Find Clay Calloway” game. The aim of the latter game? Find Clay Calloway! There’s only one Clay Calloway card, and the person holding it at the end of the game wins. Clay also features on the box you can build to hold the cards.

Another tie-in comes via Frosted Flakes in the US. In labeled boxes you buy you can get a straw/spoon featuring one of the characters. There was a Clay Calloway straw/spoon. It was in orange plastic, while other characters are featured in different colours. 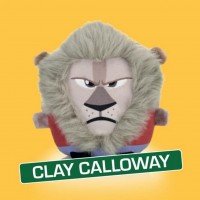 One final tie-in was through the Italian supermarket, Crai, where one could get a stuffed character from the film. Clay Calloway is one of the characters featured in this promotion. 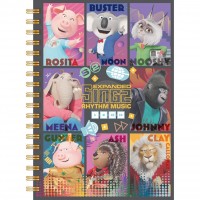 There were only a few items released when the film first debuted in North America. Some stuffed toys, a tie-in book, a line of nail polishes, and some figurines. But none of the items feature Bono’s character Clay Calloway. The characters featured in these tie ins were all characters who had appeared in the first film and who would have a built in audience prior to the film opening.

Now that the film has opened in Japan there is finally some commercial merchandise appearing which features Clay. 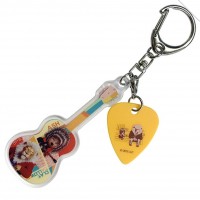 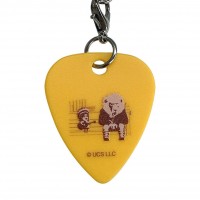 Much of the merchandise appears to be for the home office, and Clay Calloway features on a coil notebook, memo pad, stickers, folders featuring the characters, and on a Shitijiki (a hard plastic insert used between pages while writing in a notebook.) There is also a fun little key chain featuring Clay and Ash. The key chain is acrylic and features Clay and Ash in the shape of a guitar. Also attached to the keychain is a guitar pick with Clay and Ash featured on the pick. (There are also other items such as hand towels, and buttons, but these items do not feature Clay.) 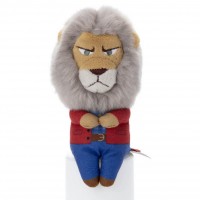 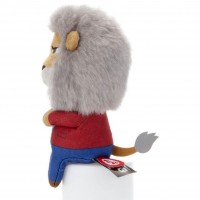 Over at Meccha Japan there’s also a plush version of Clay called a Chokkori San. The plush features Clay with a frown, posed so that the toy can sit on a shelf. The toy is 11cm in height. The toy is listed as being available today, but is currently listed as out of stock. Other characters are also available from the film.

As with any film, there’s a lot of material produced for promotion of the film. Posters and advertisements are everywhere. The difficulty is with the invention of large format home printers, it becomes hard to find what was really produced for the film and what is being printed at home. Trying to find a real film poster? They tend to be double sided so they can be used in lit marquees. They are out there if you want to look for them, but our advice would be to do a little research on film posters prior to purchase. There’s also a number of knock off items being sold via stores such as Red Bubble and even Amazon, featuring things like colouring books and T-shirts. Many of these are unofficially produced goods.

Finally we will mention that there was a Clay Calloway toy designed and produced for the Stage Sparkles series of figures. The first set of those, released in December did not feature Clay, but five other characters were part of the set. The Clay toy however was included in promotional images for the line of Sing 2 toys by TOMY, so we’re hopeful that maybe there are still toys to come, perhaps now that there is a home video release on the horizon.

Know of any other Clay Calloway merchandise in your area of the world? Let us know!