Each year at this time, we start to get a lot of questions about the fan club gift for the year and if we know anything about it. This year is no exception. It is July now, and it appears that the gift will once again be shipping out in the latter part of the year rather than in the early part of the year as they did for many years. And no, at this point, we don’t know when it will arrive. We are wondering that as well!

The gift has been announced. This year’s gift will be a double CD set, called Live Songs of iNNOCENCE + eXPERIENCE and will feature music from the 2015 and 2018 tours, as well as at least one track from the 2017 tour. The release is being mixed by Richard Rainey for the release. The CDs will be presented in a photographic book. The music will be in the form of live songs, from a mixture of concerts. As part of your subscription, if you have resubscribed for the 2019 year, you can already download six of the tracks from your profile page, including songs from Boston and Stockholm (2015), Rome (2017) and Uncasville, Copenhagen and Hamburg (2018). Please note that you will have to be logged in to see these downloads, and you will also have to have resubscribed for the 2019 year. If your 2018 subscription has not yet ended, you may not yet have resubscribed and may have to do so before they pop up, even though your 2018 subscription is still active.

The initial announcement of the release listed that the release would focus on the 2015 and 2018 tours.

“Two albums. Two tours. Two years. A limited edition double CD & digital release capturing the i+e Tour and the e+i Tour is the 2019 special gift for U2.com Subscribers. It’s the ultimate live set on double CD, beautifully presented in a photographic book documenting the iNNOCENCE and eXPERIENCE tours of 2015 and 2018. This one-off special release, produced by the band especially for U2.com subscribers, will not be on sale online or in store. From ‘The Miracle (Of Joey Ramone)’, ‘Every Breaking Wave’ and ‘Song for Someone’ to ‘The Blackout’, ‘Get Out Of Your Own Way’ and ’13 (There Is A Light)’, this is the ultimate live companion to Songs Of Innocence and Songs Of Experience, celebrating two extraordinary tours. The complete tracklisting will be published in early 2019 with shipping beginning in Spring 2019. From January until dispatch of the double CD set, we’ll be offering regular downloads of these new live tracks.” 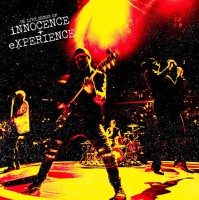 Plans seem to have shifted a bit since that initial announcement, including a shift away from just focusing on the 2015 and 2018 tours with the inclusion of the song “The Little Things That Give You Away,” only performed at the 2017 concerts. This was further indicated by the shift in title from Innocence + Experience Live, 2015 & 2018 to the newer Live Songs of iNNOCENCE + eXPERIENCE. While we have not seen a final track list at this point, all of the songs that have been mentioned in press releases, in poll questions and in the downloads have been taken from Songs of Innocence and Songs of Experience. We haven’t been able to confirm that the songs from these two albums will be the only songs included in this release, but we suspect that may be the case. The proposed artwork for this release also seems to have shifted from the purplished hued photo used in early press for the release, and in the first set of downloads, to a newer orange and yellow cover being used in the more recent downloads.

The initial announcement mentioned that the full track listing would be published in early 2019, with shipping beginning in Spring 2019. Assuming they meant Spring in the Northern Hemisphere, both of these dates have now passed, and neither event has happened. Downloads from the album have been made available on February 26, April 26, and May 27. The article accompanying the downloads in April suggested that the final track listing for the double album is “nearly complete”, and that additional artwork, further downloads and dispatch information would follow next month. Again, this has not happened and as of July 10, the full track list has not been revealed, nor have any notifications been sent about shipping of the fan club gift. But delays of these sorts shouldn’t surprise any of us at this time. The U2.Com gifts are often delayed from initially announced dates. The table above shows the different gifts that have been made available over the years, as well as the announcement date of the gift, and the first delivery date of the gift. Also included is a column that lists the number of months behind January that the gift started to be received. It now being July, the gift this year is later than most, with only two gifts being later in the year, the 2018 gift of “3-D Dance Mixes” and the 2017 gift of “The Joshua Tree Singles”, which started delivery in September and December respectively. One gift, the 2015 release of “Another Time, Another Place” started to appear at the end of July. It should be noted that we are discussing when the gift starts to ship, and this is not necessarily the date when all fan club member have gotten their gift. The releases in the past have taken 3-6 months to be fulfilled and fully shipped out, with one gift, “The Joshua Tree Singles” taking even longer to reach all subscribers due to production issues with the recording. In the past five years there has been no gift that has been received before June from the fan club, so we aren’t worried yet that this one is delayed. The last gifts received at the very start of the subscription year were North Side Story, the book sent out for 2014, and From the Ground Up, the CD and book sent out for 2013.

We don’t know when this new gift will ship, but we are hopeful to have some news of it soon. Perhaps we’ll get some additional downloads soon from the release with an announcement of the track listing? If we get any information about the release, we will pass it along here, and on our social media channels.