The Crystal Ball: What Comes Next

It has been some time since we have taken a look into the future. To be honest, there has not been much to discuss. There aren’t many reliable rumours out there at the moment. We continue to only publish rumours that come from reliable sources, and things we can confirm via multiple avenues. It appears the pandemic have slowed a lot of things down, including the rumours about upcoming U2 projects. Our contacts at Universal have even said that they are surprised at how little U2 have on the upcoming release list. “Fire“ coming out on Record Store Day on June 12 is the only item currently listed for a physical release. And shipments of this years release from U2.Com should start appearing soon. This year they are releasing a 2-disc set featuring the full concert from U2’s appearance at the Apollo Theater in 2018.

A few people have been asking why it appears that Bono has stepped back from U2 X-Radio of late. When the station launched last July, he had a monthly show called “Bono Calling.” But only two episodes aired, and it has not returned to the air since. He has recorded some smaller pieces since then but “Bono Calling” appears to be on hiatus. It turns out that Bono has some deadlines coming up. He’s in a final crunch to finish off his book. This may be why he’s taken a bit of a step back from the station lately.

The book, is an autobiography, which Bono is writing himself without a ghost writer. We can reveal that the publisher is hoping to publish the book this Fall. Bono had not yet turned in the final draft when we spoke to our sources, so dates could still shift, but they are hoping he will finish up in time to publish before Christmas.

It’s not only a written book that he may be working on. There will also be an audio version of the book published. Bono will have to leave some time to record that as well, if he’s planning on being the one to read it. It is also hoped that Bono will be available to do publicity for the book including some form of book tour in the Fall. But those plans require a book to be finished, as well as the world to be a little more settled than it is currently.

The book will be published by Penguin / Random House. When more information about the release date is available we will share it.

Unfortunately we have no news on the release date for Heartland, the concert film documenting the Joshua Tree anniversary tour, directed by Anton Corbijn. The intention still is to release the film to theatres, and all indications are that the band are willing to wait until it is wise to do so. Next year will mark the 35th anniversary of the original release of the album. We are told that an EP is planned to release in conjunction with the film, which will include some unique versions of the songs, not just live versions of the material from the film. The band did record footage of them playing the song “Heartland” in the desert, footage of them performing B-Sides “Sweetest Thing” and “Spanish Eyes” in concert in Mexico City. We are also told the band have filmed a performance of the band working on “Walk to the Water” in studio in late 2017 for use in the film.

Initially the film was delayed so that it would not come out before the 2019 dates in Asia, Australia and New Zealand. It later had been planned for a June 2020 release, before the pandemic started. While theatres have started to open in some areas of the work, in many countries they remain closed as countries continue to struggle with the pandemic.

The Heartland film isn’t the only film coming up that has been affected by the pandemic. Bono is due to star in Sing 2 as Clay Calloway, a retired rock star (who is also a lion.) The release of the film was initially due December 25, 2020, and then pushed back to July 2, 2021, but due to COVID-19 schedule changes, has now been pushed back to December 22, 2021 instead. Bono’s involvement was announced in December. In the main part of the film Bono is rumoured to perform two songs with the cast, including a U2 song. The Grand Finale of the film will take place at the variety show and will feature the cast singing a number of songs. It is expected that Bono will be part of this finale to the film as well. Recently the studio producing the film have shifted around some other release dates, but Sing 2 is still currently scheduled for December 22, 2021.

We have been told recently that the band members are in good health, and are happy to have projects to work on through the lock down. In January 2021, The Edge and Daniel Lanois discussed working on new material through the lockdown. (Each are working on their own projects.) The Edge said he’d been working on many things, “I’m working on a lot of new songs at the moment. We have a bunch that are…we haven’t figured out what to do with them yet. The lockdown has been quite a creative period for me.” 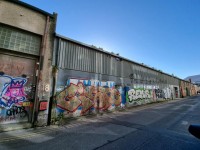 The Edge has not only been working on new music, he has taken the lead of late tracking down items for the planned U2 Exhibition, which will eventually be built on the site of their Hanover Quay studio in Dublin.

Sadly, construction of the site has not yet started. As you can see from the photo above the studios were still standing the last time we were by in March. Covid-19 has caused a delay in many construction projects in Ireland, and that is likely the delay here as well. But the exhibition is still being actively planned. The Edge has been digging into old memorabilia and collectibles for the exhibit. We are looking forward to seeing what he has unearthed.

As usual we are seeing lots of wishes for a new album or a new tour. We’ve asked a number of our usual reliable sources and we are being told that neither album nor tour are close to being scheduled just yet.