U245: Forty Five Years of U2 with Ivan McCormick

It was September 25, 1976 that a group of students from a Dublin school, Mount Temple, gathered together at 60 Rosemount Avenue in Dublin to form a band. Today is the 45th anniversary of that day, the day that U2 first came together. The kids were brought together by a note posted by drummer Larry Mullen on the school bulletin board earlier in the week. The note invited people to meet a few days later at his house if they were interested in joining the band. The kids gathered together on the Saturday afternoon, and tried to figure out what each could bring to the band.

That day was the first time that Bono, Larry, Adam and The Edge came together as a band. They weren’t alone however, The Edge had arrived by bus with his brother Dik. And another boy, Ivan McCormick had arrived with his own guitar. (Although Peter Martin, a friend of McCormick’s has been sometimes listed as having been at that initial meeting, McCormick cannot recall him being there.) In those days McCormick kept a diary and because of that diary we know the date of that first gathering. The entry for September 25th reads, “Watched T.V. Joined a pop group with friends. Had a rehearsal. Great.”

To celebrate the anniversary of the formation of the group, we reached out to Ivan McCormick to answer a few quick questions about those early days of the band. He graciously agreed to answer a few for us.

U2Songs: Let’s start at the beginning…did you see the note Larry Mullen posted on the Mount Temple bulletin board?

Ivan: I never saw the note myself. Our mutual friend, Peter Martin, mentioned it to me and told me I had to go to the audition, he reckoned I’d be a shoe in because I had a decent instrument.

U2Songs: What are your memories of showing up at Larry’s home that day?

My guitar was better than any other there so that helped my status, a sunburst Strat copy made by a Japanese company called Teisco I’m not entirely sure what we played, probably “Johnny B Goode”, maybe “Jumping Jack Flash”, T-Rex possibly, “Smoke on the Water” is a likely contender.

We were in Larry’s kitchen, it was very cramped, I think his drums were red…the scene in Killing Bono does it justice apart from the bit about playing Dire Straits who didn’t even exist in 1976. (Rolls Eyes)

U2Songs: You eventually left the band, but how long did you practice with the band? Did you play any shows with the band in front of an audience or did you leave before they got to that point?

Ivan: I only lasted a few weeks. We did some rehearsals in Mr McKenzie’s music room at school where my lack of rock’n’roll savvy became more and more apparent.

However I did witness the birth of the Bono/Edge partnership. Paul played guitar too but was not as good as Dave and he would, on bended knees try to exhort a great guitar solo out of Dave, staring intensely at Dave’s fingers, his own hands gesticulating over them in an agonising surrogation of his own frustrated ability.

I never got to play a show, in fact our first booking was used as the excuse to drop me, Adam had the job of making the phone call.

The penny dropped, I was out of the band.

Had I been quick thinking enough instead of instantly becoming an inconsolable blubbering mess, it might have occurred to me that we were ALL too young to get into a pub in 1976, except maybe Dick.

U2Songs: Do you have a favourite memory of U2 after you left the band? Did you go to many shows in the early days? Do you go to see them these days?

Ivan: I went to ALL the shows I could, school dining room, school basement, church halls, they were a great band even then.

I started a punk band with Larry’s friend Frank Kearns and we played on the bill with U2, well The Hype as they were called at the time. I remember vividly when they changed their name to U2, how sh*t we all thought it was. They threw away a lot of their songs too and very consciously formed a new style. It seems counter productive and a bit of a betrayal at the time but we soon got over it as their new incarnation was even better than before.

I went to all their Dandelion Market Sunday afternoon gigs in central Dublin and with various bands I formed we supported them at venues like The Magnet, Toners and McGonagles.

I’ve continued to go and see them throughout their success, missing only one tour, the 360 degree tour 2009-11. They’d just released their album No Line on the Horizon which was the first one of theirs that I wasn’t instantly impressed with, some of it has grown on me since but it’s probably their weakest moment in my view.

They are an amazing live band and if they continue touring I’ll continue to go and see them, they still very kindly give me free tickets and backstage passes. They are good people who have never forgotten their roots and their fans, extraordinary really when you think how famous they are and how long it’s been. 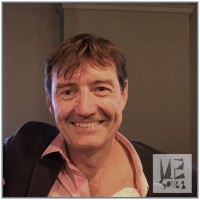 Ivan: These days I run a band called “29 Fingers”. We’ve been going since the late 90s and it’s been very successful. We’re a live act, playing covers and entertaining private events, we do about 120 a year…unless of course we’re locked in our houses! In March 2020 our business, like so many, collapsed overnight. Everything stopped, everyone cancelled, no one booked…there was literally no ‘live entertainment’.

Early on in the first lockdown, June 6th 2020, in an effort to overcome our frustration, we staged a socially distanced festival from my back garden, broadcast live over the internet. It was great fun and ironically we played to our biggest audience ever, almost 10,000 on the day and many views since on various platforms, but it was not a money making venture (though we did raise quite a bit for a local charity called “The Lowde Trust” which support young musicians in their ambitions.

At the end of summer when restrictions were lightened we played a few gigs to just 30 people at a time, but then we were plunged back into lockdown and only really saw any light this summer, however work has come back with a vengeance and we’ve been busier than ever. 9 gigs in 1 week recently and most weeks see us playing 4 or 5 events…pent up demand…long may it continue! It was interesting being forced into “early retirement” for over a year, I can’t say I hated it. The weather was amazing and I spent the time building in my garden which now sports a very unusual treehouse, trampoline and swimming pool combination, you’d have to see it to believe it but the kids have had a lot of fun!

Ivan McCormick continued in music after that short stint with U2. He went on to form a number of other groups, including Shook Up! with his brother Neil. Shook Up! saw the first released music from the McCormick brothers, but Ivan would also play on a few tracks on Neil’s album released under the name The Ghost Who Walks. Their story of the McCormick’s lives in the music business in the 1980s is covered in Neil’s book, Killing Bono. The book was adapted to film, released in 2011, and also for the stage as Chasing Bono in 2019. These days Ivan runs 29 Fingers, a high energy live band performing covers and playing private events. We would like to take a moment to thank Ivan for the interview today.