Upcoming Books and other News Bits

There are a few new books about U2 on the horizon. These are due out in the coming months and can be pre-ordered now.

Cover of U2: Every Album, Every Song

In November, U2: Every Album, Every Song by author Eoghan Lyng is being published by Sonicbond. The book is due on November 27, and will be 176 pages in length. Lyng is a music writer who currently calls Dublin home. The description of the book on Amazon.com is as follows:

“U2 were Formed at a Dublin Secondary School by Adam Clayton, Bono, The Edge and Larry Mullen Jr. Like most bands, they wanted to be among the best in the world. By 1991, with Achtung Baby in the pipeline and War, The Unforgettable Fire and The Joshua Tree behind them, they were arguably deserving of that intention. Yet there was more to the band than the stadium records that made their fans deliriously happy and the music’s creators artistically and lucratively fulfilled. Their second album, October, opened the four piece into a spiritual journey that fed their later work. Their double album Rattle and Hum proved one of the greatest torchbearers of American music of its time. And then there were Zooropa and Pop – dance oriented albums that showed the initially-punk oriented quartet exploring effects, sounds and territories that few of their contemporaries dared contemplate. That they should exist forty years after their debut is testament to the will, fortitude and versatility U2 holds. Their most recent works Songs of Innocence and Songs of Experience have proven their most reflective and perhaps their most autobiographical. What lies next for U2 only the band know, but this book delves into their past work, without leaving a passenger behind.”

Cover of Bono: From the Sheer Face of Love

And coming next February is Bono: From the Sheer Face of Love by American author Travis Trasher. The book is a biography and will be published by Zondervan on February 2, 2021. The book is listed at 272 pages in length. An audiobook version is also listed. Thank you to U2Achtung for pointing this one out to us.

“Unprecedented in storytelling and vivid detail, this biography reveals the heart and soul of one of the world’s most iconic superstars. A journey of love and loss, art and faith, and the salvation found in both—this is the story of Bono. Extensively researched and written in compelling prose that unfolds like a novel, this unique and intimate look at Bono’s life tells of the critical moments in his journey—how the death of his mother at age fourteen sent him on a search that led him from the anarchy of his youth to joining a band, to forming a career as a true artist and the front man for one of the most popular bands in the world. That quest led him further on to working as an activist for the poor and needy and becoming an ambassador of love and faith in the world. Bridging all these moments together is an incredible faith that has characterized Bono’s life in fiercely creative and unconventional ways. With revealing quotes from the man himself about family, faith, heartbreak, and art, this is a must-read for anyone who’s found themselves singing along with Bono. Drawing on hundreds of interviews Bono has given over his decades-long career, this book composes an intricate portrait showing the personal and spiritual becoming of a legend. Authentic and gritty, Bono’s story resonates with the daily fears we all have to overcome and our universal search for love.”

This book is written by Travis Trasher and does not appear to have direct involvement from Bono, and should not be confused with the autobiography of Bono that is being published by Penguin. We are told that the autobiography is currently back in Bono’s hands for additional editing and is still expected soon.

Part of the promotional tie in to U2’s new radio station, U2 X-Radio, has been a new campaign using mobile phones. On July 1, 2020, when the station launched, a video posted on U2’s social media accounts featured the Edge, inviting you to text him. The number is 917-540-8477, and The Edge held the number up during the video and tells viewers he’s looking forward to getting their messages. The area code is a New York number. The Edge explains, “U2 have got a new Community number, it’s a way for us to stay in touch with you, we’ll be checking the messages regularily.”

What’s Community? Community is a start up company backed financially by U2’s manager Guy Oseary. He helped develop the platform which gives artists direct information about their fans, instead of being gathered by a third party such as Live Nation, Facebook etc. Founder and CEO of Community told Billboard “People are starting to wake up to the fact that you may be investing a ton of time and energy and resources into social media, but you don’t necessarily have a direct relationship with that audience.” Other acts recently adopting the platform include OneRepublic, Paul McCartney, Ashton Kutcher and Jennifer Lopez.

So what happens when you text the number? If you are in the USA or Canada you get a reply, explaining what Community is and asking you to click a link. If you are outside the area currently active you get asked if you would like to sign up for when the service is available in your area.

And since then there has been one text message sent widely by The Edge stating “Hi this is The Edge texting on behalf of the band (they don’t love you as much as I do!…) I’m reading your messages slowly but surely and looking forward to sharing ideas and news with you guys. If you happened to hear my show ‘Close To The Edge’ on U2 X-Radio, let me know if you enjoyed it. Send a guitar emoji or a thumbs up, maybe even both! Edge” That message was sent to all users who had completed the sign up process. But several users also reported getting personal messages in relation to their texts they had sent in. It appears that some of the texts were answered by The Edge, while other responses seemed to be marketing for the station, talking about upcoming guests on his show.

We believe that the texts are likely being sent to someone who sorts through the messages and passes along the occasional message to The Edge for a response. It is unlikely that the band is seeing everything that is sent in, but we do believe a few of these have been passed along for a more personal reply, to drum up interest in the service.

Bono and Adam Clayton have also had a hand in the fun. If you call the number, rather than texting it you get Adam Clayton’s voice on an answering machine, ““Hey It’s Adam! You have reached the U2 line. We don’t check voice mails but why don’t you send us a text?” and yesterday, out of the blue, a new message arrived with a link to a sound file. “Hey it’s Bono, I hear The Edge has taken control of our Community. Any issues though, send them my way, I may not be the best at replying, but rest assured, I will be watching.”

SiriusXM is now asking people interested in suggesting five songs for their Desire segment to also use the same number. “Send us your five favorite U2 songs to desire@siriusxm.com or text us on (917) 540-8477 You might get a chance to hear yourself on air!” While the number seems to be in use for the station itself, and promotion of the station, expect this trial to be expanded to other countries if it proves to be successful. 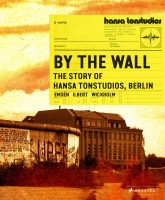 Cover of By the Wall: The Story of Hansa Tonstudios, Berlin

Another book coming on February 23, 2021 is By the Wall: The Story of Hansa Tonstudios, Berlin. While not a strictly U2 book, most U2 fans will have an interest in the story of Hansa studios where a portion of Achtung Baby was recorded. This one is being published by Prestel, and will be 256 pages in length, and is being edited by Fredrik Emden, Par Wickholm, and Michael Ilbert.

The description is as follows:

“This book tells the exceptional story of Hansa, Berlin’s legendary recording studio, through rare behind-the-scenes photographs and first-hand accounts. Hansa Studios is situated in a former opera house that was, in turn, a 1920s cabaret, the performance hall of the State Chamber Orchestras of the Third Reich, partly demolished by allied bombs, and all but abandoned with the construction of the Berlin Wall. It was reclaimed by the genius Meisel brothers in 1974, and became the legendary studio it’s known as today. This photographic history includes images from renowned music photographers Anton Corbijn, Michael Heeg, Michael Putland, Jim Rakete, and others. The book features many previously unpublished shots of David Bowie, Iggy Pop, Depeche Mode, Nick Cave and the Bad Seeds, Siouxsie and the Banshees, and U2—recording and hanging out. It also presents music ephemera such as mics, sound boards, session notes, and historic recording equipment that feels both antique and fresh. Revealing interviews with producers Tony Visconti and Gareth Jones, musicians Mick Harvey and Barry Adamson, and others, offer behind-the-scenes takes on what made Hansa such a special place, and why so many artists recorded there.”

And for those who may have missed it, just a reminder that Little Steven’s Sun City and Born Again Savage albums are being reissued on CD, with one out now and the other coming out on July 24.

Finally, if you haven’t noticed, U2 are uploading older videos to their YouTube account. These are showing up as older videos in the list of videos, so worth a scroll back if you haven’t checked out the full content of the channel in a while. These new additions include a video for “Miss Sarajevo”, live content from the Boston 2001 and Rose Bowl 2009 videos and more.